We didn't plan on going to Magic Kingdom because DisneyLand's Magic Kingdom in California is about 2 hours away from San Diego where my sister and Cecelia live. We figure we'd go there soon. Plus a lot of people say it's better than the one in Florida anyway. But then Felice got free tickets for us to go one night. I haven't been there in decades, and I don't remember anything from it. We watched Philharmagic, a 3-D movie about music. We went on It's a Small World (it's just amazing how it's lasted this long not being based on a hit movie). 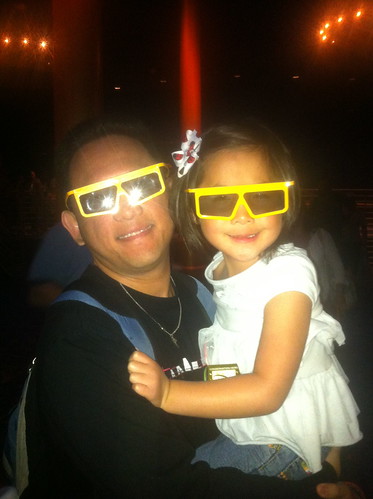 But the best part was when it got dark. They have an electric parade where the floats and characters are smothered in bright lights. It's also the only time we saw Mickey who, in my opinion, has become quite a recluse, only coming out when it's conveniently magical. Then there was a fantastic "projection" show. The castle serves as a projection screen and a very elaborate and meticulously calculated projection shines on the castle. There are all sorts of images of actual people visiting the park that day. We were really wowed when (say that 5 times fast) they made the giant castle look animated. There was one point where a turret appeared to be taking off like a rocket. VERY impressive. And to top it off, the castle is the backdrop to a fantastic fireworks show. My favorite part was when a firework was shot arcing over the castle like you see at the beginning of every Disney movie. And then Tinkerbell (yes, the real Tinkerbell) flies out of the castle across the park. How she flies in such a straight line and at constant speed is beyond me.